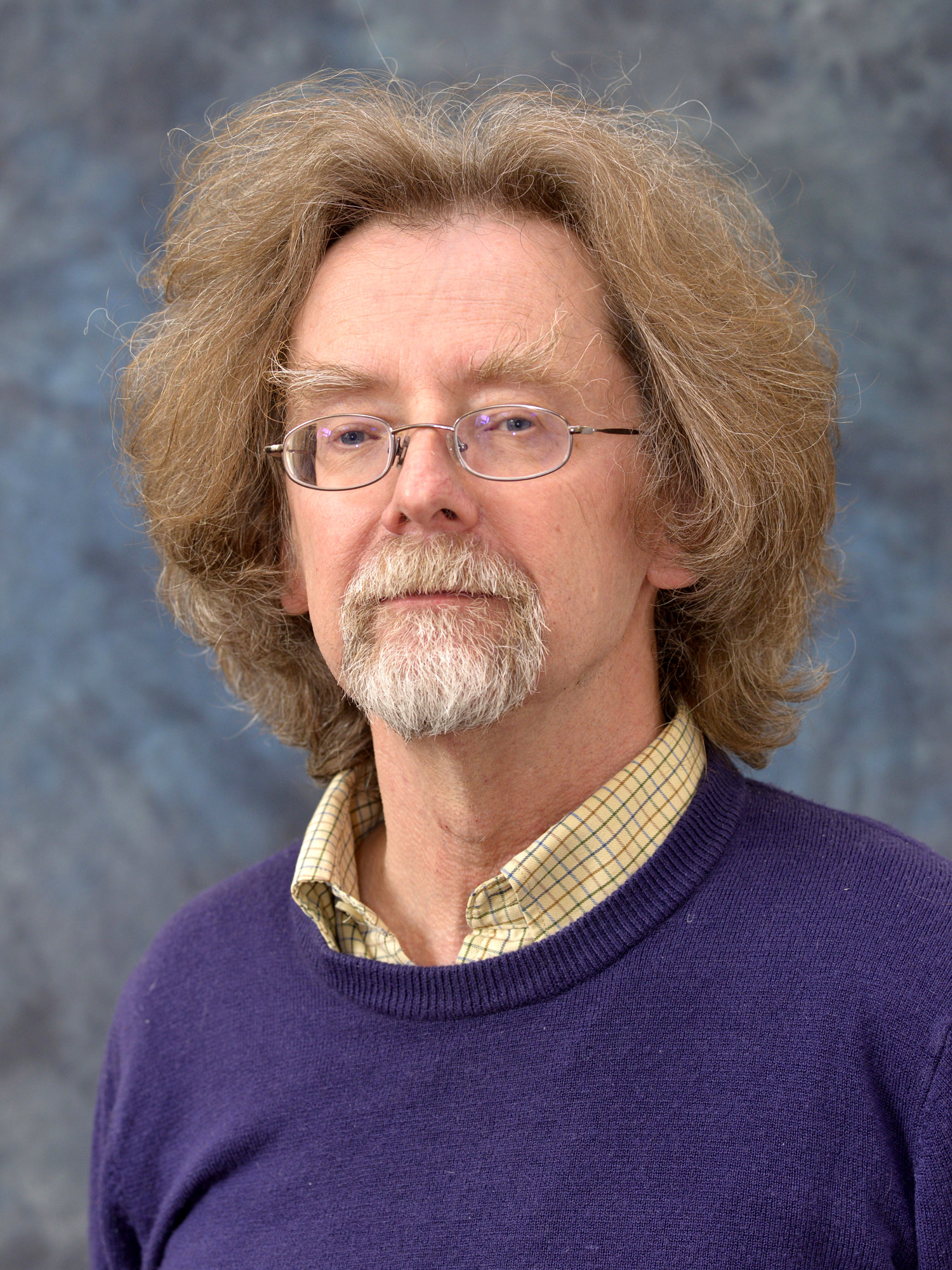 Department of English and American Studies

Privatdozent attached to the Chair of English Studies: Literature

1980       BA with Honours (First Class) in English Language and Literature

The story of my life so far

I was born in the West Country of England, a very long time ago. My father, Crofton, was a cutter in a bed-factory and my mother, Lil, was a housewife. I liked reading books, and was quite clever, so I passed my 11-plus and went to a direct-grant school in my home town of Wellington. I had two great teachers in Jo Storr, who taught me English, and Len Isaac, who taught me German and French. I owe a great deal to them, and to my mum and dad, who cherished this funny little book-worm whose interests must have seemed very remote to them at times. So I went to a well-known university in the South Midlands, originally to study German and French, but, after spending a quiet and happy year in Schleswig-Holstein as a DAAD Assistentlehrer, I changed to English Literature for no very good reason. The years passed, and I ended up with a DPhil on the Elizabethan playwright, John Lyly. I taught for a while in a cramming-school, then, at a bit of a loose end, and prompted by my then rather exasperated girl-friend, I actually started to apply for lecturing posts. And lo! The university of Newcastle upon Tyne took me on as a temporary lecturer, and then that position — much to my long-suffering mother’s relief — became a permanent post. Eventually, after writing some books and a lot of articles, and setting up an international research forum called the Tudor Symposium, I ended up as Professor of Tudor and Elizabethan Literature. After a while, though quite a long while, I got tired of the relatively benign but increasingly insistent bureaucratic culture that was taking over the English university, including my own, so I went down to a half-time post. Fortune smiled again, and my wife, Ewa, was elected to a Humboldtprofessur here at the Friedrich-Alexander-Universität in Erlangen. She took me along with her, and also our two well-behaved cats, Barney and Poppy. Now we live in Marloffstein, on the top of the hill, and I come in once a week to teach Shakespeare or the ghost story or whatever as a Privatdozent. And I am still an emeritus professor at Newcastle. Perfect!

What I’ve been doing all this time

My work has fallen into two main areas, quite closely related, but I’ve also dabbled in other areas as well. The two main ones are Elizabethan drama and mid-Tudor literature. I’ve always liked acting, and I wrote and directed quite a few plays when I was a student. I don’t remember exactly how I became interested in John Lyly, though I think Anne Barton comes into the picture here. In any case, I put on Lyly’s Galatea whilst studying for my finals, and I wrote my undergraduate dissertation on Lyly’s early plays. Whilst having lunch in between the exam on Renaissance literature and the one on the Romantics, a friend asked me what I planned to do next. I had no idea, so she said I ought to do a D.Phil. on Lyly — and so I did. I was easily distracted, by thespianism, for example, so it took ages, but in the end I finished, thanks to the help of my supervisors: Anne Barton, Emrys Jones, and Helen Cooper. Then I went to Newcastle, and, after a while, with the encouragement of Ernst Honigmann, I wrote my book on The plays of John Lyly.

My interest in other Elizabethan dramatists has been satisfied mainly in teaching, but there have been essays on Marlowe and Shakespeare. Usually, these pieces have had a comparative element. One of the Marlowe essays looks at the German Faust tradition, and I’ve written two essays on adaptations of Titus Andronicus by Dürrenmatt and Heiner Müller. I’ve also written a few things on mid-Tudor drama, including a recent piece on Grimald’s Latin play Archipropheta, once again compared to a German play, this time by Jakob Schoepper.

My interest in mid-Tudor literature goes back to the days of my thesis, when I read all sorts of interesting texts by writers from the 1560s and 1570s that might possibly have influenced Lyly. Hardly anything seemed to have been written on them, yet they deserved to be much better known, at least, so I thought. My first article in print, in fact, was on two masque-orations from the 1560s by the unjustly neglected poet Thomas Pound. I found out I was not alone in thinking that there needed to be more work done on the non-canonical period from the 1540s to the 1570s. And so was born the Tudor Symposium, which grandly styled itself as an international research forum in sixteenth-century literature. Over the next years, I organised or co-organised several conferences, and edited or co-edited several volumes of essays from these meetings,  until I stepped down after ten years or so of absolute monarchy. My great partner in crime here was Cathy Shrank, who masterminded a successful funding bid which eventually led to an on-line database on English literature between 1530 and 1580 (‘The origins of mid-Tudor literature’). I had a part to play, of course, but Cathy was the dynamo. The project also led to The Oxford handbook of Tudor literature, co-edited by Cathy and myself, which won a prize for the best reference work — and rightly so. It’s a great monument to the work of all the contributors. And it has also helped to raise the profile of the mid-Tudor period, which was covered by the massive central section of the book. But I also write on later Elizabethan auhtors, of course, and they are the main focus of my book on Elizabethan humanism.

I have also taught and written on the English ghost story, and I have written the first draft of a short book on it for the Pivot series at Palgrave Macmillan. Work on this has stalled rather due to the upheavals of this late-life adventure; but I shall complete it once things settle down again. I also write the occasional essay on the great poet of the Hungarian renaissance: Bálint Balassi. I have also written a novel, which I gave to my niece and god-daughter, Stephanie Lucy, on her wedding-day several years ago.

What I plan to do in the foreseeable future

Old Tudorists never die (until they do). Whilst waiting to get settled down and comfortable again, I’ve been working on what is essentially one big mid-Tudor project — the dates are 1550 to 1570 — with lots of different strands. I enjoy translating Latin poetry, so I’m translating the shorter Latin poems — and one or two longer ones — written during the period I’m interested in. Most of the poets are unknown to literary history because they only wrote a single poem, so I am also writing brief biographies of each of them. I call this strand: ‘Lives of the minor mid-Tudor Latin poets’. But I’m also compiling biographical material not only of the poets themselves but also of people who have a tangible relation with them in one way or another: Family members, especially, but also friends at school and college, patrons, and so on. It includes a literary gazetteer, too. I will probably run out of petrol before I finish this project, but I am aiming towards a prosopography of the minor mid-Tudor literary scene. Finally, I am thinking and reading a lot about the theory of literary history. Where do my ‘occasional poets’ fit in? Not in traditional literary history, which ignores them, of course. Yet I should say that the majority of poets in this period are one-hit wonders. I have yet to find my way forward here, but I think it lies in the exploration of the anarcho-structuralist pathway to wisdom.

2015: ‘The novels of Bohumil Hrabal’ (PhD in Creative Writing | supervisor for critical essay).

2007: ‘Hell on earth: Tyrants and tyranny in English tragedy from Sackville to Shakespeare’ (PhD sole supervisor)

2006: ‘“A hawk from a handsaw”: Early modern metadrama and the staging of the informer’ (PhD co-supervisor)

2016:     External examiner for a PhD on the Tudor dream-vision at Birmingham

2013:      External examiner for a PhD on the Latin works of Lawrence Humphrey at London

2013:       External examiner for a PhD on A mirror for magistrates at Oxford

2014:       External examiner for a PhD on a mid-Tudor manuscript miscellany at Sheffield

2013:       External examiner for a PhD on the representation of cardinal Wolsey in Tudor literature at Sheffield

2007-10:   External examiner for late mediaeval and early modern undergraduates courses at the University of Aberystwyth.

2007:          External examiner for a PhD on royal iconography in Renaissance drama at Sheffield Hallam.

2005:          External examiner for a PhD on Shakespearean Tragedy at Trinity College Dublin.

2003-2009: External examiner for ‘Shakespeare: Text and Performance’ at the Open University

2003:           External assessor for a new Open University course on ‘Shakespeare: An Introduction’

2003:           External examiner (Zweitgutachter) for a Magisterarbeit on Renaissance demonology at Greifswald