Locating Intersections of Medicine and Mobility in 19th-Century Britain 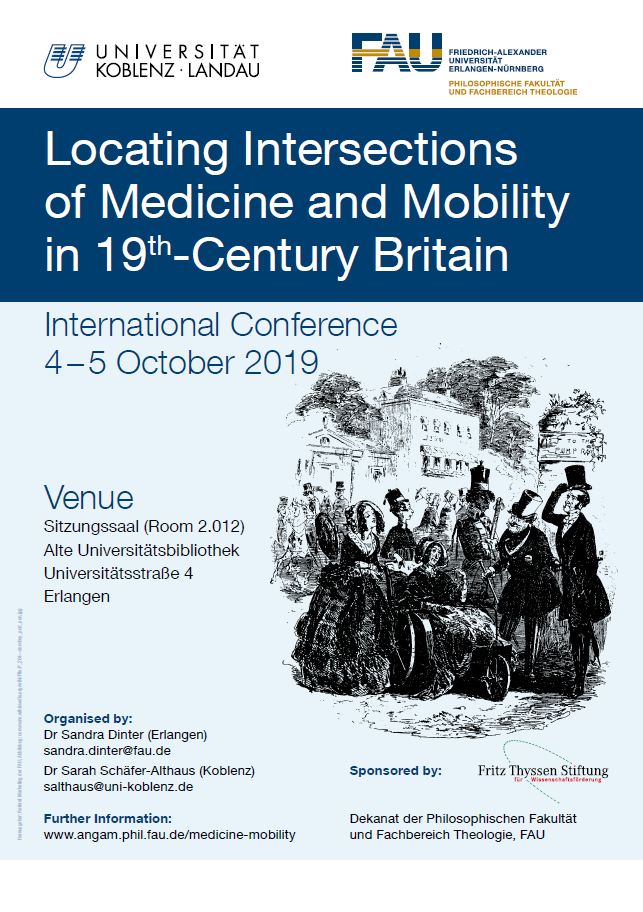 While the 18th century brought forth important breakthroughs in midwifery, obstetrics, vaccination and public health and hygiene, it is the 19th century which witnessed the rise of modern and institutionalised medicine and continues to be known for its scientific discoveries and new diagnostic procedures. A similar development can be observed with regard to mobility during this period. The technological advancements of the industrial revolution, the spread of railways, steamboats, the underground and omnibuses marked the dawn of mass tourism and made it easier for the greater population to move from one place to another than ever before, be it for necessity or for pleasure. The aim of this conference is to locate and examine possible intersections between medicine and mobility in 19th-century Britain, an intriguing topic that has only received little scholarly attention thus far. At the centre of discussion will be the literary, cultural and historical processes through which medicine and mobility are intertwined and reconfigured in the 19th century. We are interested in debating the following questions: What are the links between (im-)mobility, health, and medical surveillance and how are these issues represented in literary texts and other cultural artefacts in the 19th century? Which physiological movements were pathologised and which were considered beneficial? How did mobility and mass tourism affect forms of therapeutic exercise and the implementation of innovative treatments and vice versa? What impacts did race, gender, sexuality and class have on (im-)mobility and medicine?

The conference is organised by Dr Sandra Dinter and Dr Sarah Schäfer-Althaus.

The conference is funded by the Fritz Thyssen Foundation and the Dekanat der Philosophischen Fakultät und Fachbereich Theologie, FAU.